Due to the latitude (59°57′ n.l. 30°19′ e.l), Petersburg is well known for the remarkable natural phenomenon “white nights”, which lasts from late May until mid-June. “White nights” have long became a symbol of the city and a time rich with festivals, creative contests and both cultural and entertainment events. 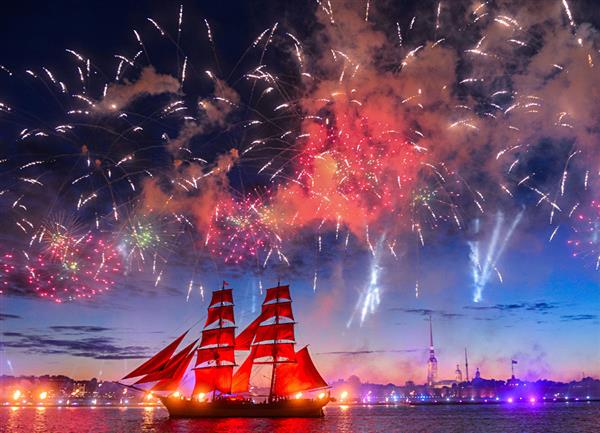 With the help of literature and poetry; St. Petersburg got a reputation as a city of constant grey skies, rains and fogs. Statistics show that there are at least 62 sunny days per year in St. Petersburg. Probably that picturesque cloudy sky ends up being the perfect frame for the monumental beauty of the North Capital of Russia. Without the rainy season, snow and iron-grey sky, Saint Petersburg would miss part of its charm, it would cease to be that magical city; famous for its mystical beauty, melancholic temper and sophisticated architecture.

Winter is always snowy in St. Petersburg. While white and fluffy snow covers trees and houses, giving the city a special charm, Neva freezes in the ice fetters and sparkling icicles hang down from the roofs., It is also time for all kinds of winter sports and activities; skating rinks are available, ice slides are made and just in the nearest park it is easy to rent ski equipment or even a Finnish sled. New Years is celebrated lavishly here and the winter holidays are packed with entertainment and interesting events. The average temperature in December is -4,5 °C in January -7,7°C and in February -6,8°C. 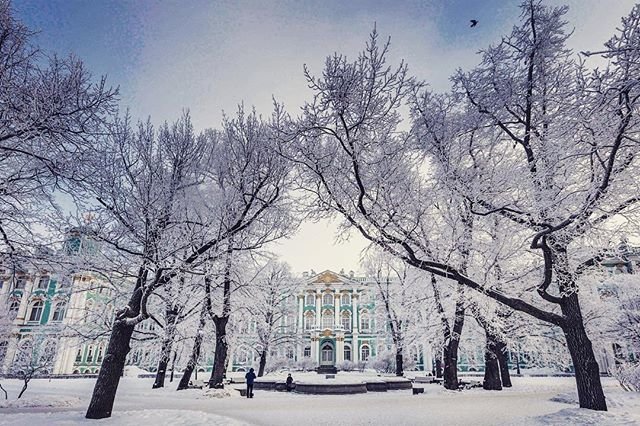 Spring usually comes slowly but as soon as it arrives, it changes the city features by all means. Neva starts flowing again, the trees turn pistachio green and the sun shows up again. But frankly, the winter spirit disappears only at the end of March or April. Average temperature rises above zero, by the end of April it is already +5 °C, in May it is +10 °C and higher.

Summer can differ from year to year. It is always warm, sometimes rainy, sometimes stuffy if the temperature rises above 30°C – the heat as well as the cold is hard to tolerate because of the high humidity. Quite often, the warm weather lasts until mid-September, indulging with sunshine St. Petersburg’s residents and guests. The average temperature in June 15,5°C, in July 17,6°C, and in August 16,2°C. With approximately 16 days of summer the temperature can rise above the 25°C mark.

Autumn, especially late autumn, is rainy, chilly and quite slushy. But it’s the best time, tenderly called “babie leto” (Indian summer) impressing you with the bloom of colors and bright shiny days. Average temperature falls from 10,9°C in September to 0°C in November.

It is illegal to charge for goods or services in any currency other than rubles, and no longer will taxi drivers or bartenders happily take your dollars. Nonetheless, salaries and rents are still sometimes quoted 'unofficially' in dollars. There may also still be some bars and restaurants quoting prices in 'y.e.', which means 'standard units'. Popular in the late 1990s and early 2000s, this system allowed establishments to set their own conversion rate, normally somewhere between, and thus not have to alter their menus every time the ruble jumped. With the currency's increased stability, this practice has thankfully almost completely disappeared. 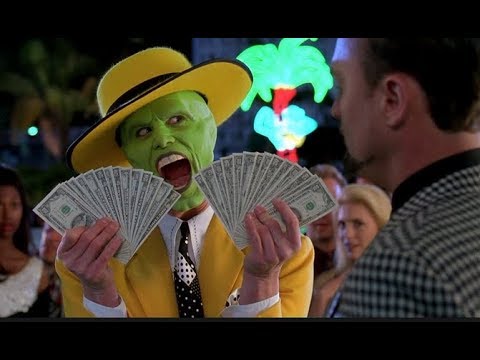 Recent legislation has dramatically cut the number of places you can exchange money in St. Petersburg, although there are still many more bureaux de change than in most European cities, some open 24-hour. The market is very competitive, and it's worth shopping around to find the best rates, particularly if you plan to change large sums. This only applies to dollars and euro, though, and other currencies are normally only changeable at larger banks or central exchange offices. Commission is normally negligible.

Although for locals car ownership is a highly desirable sign of success and social status, St. Petersburg's public transport network is actually extensive and efficient, if often overcrowded. The metro is undoubtedly the best bet for visitors, and covers nearly all of the city, with new stations opening almost every year. It also has some spectacular station architecture.

Overground transport is bewilderingly varied, but not difficult to use with the help of a few pointers (see individual pages below), and St. Petersburg's latest transport project means that you can even use the city's waterways to get around. The only real disadvantage of the public transport system is the lack of nighttime services, so if you plan to stay out after midnight, you will have to rely on taxis or your own two feet to get home.

Although not as extensive or extravagant as Moscow's Metro, the St. Petersburg Metro leaves most other underground rail systems in the dust, and is efficient as well as beautiful.

St. Petersburg has a relatively extensive system of trams, although most of them run outside the city centre, and services can easily be disrupted by roadworks. The bus network in St. Petersburg is cheap and very extensive, but not particularly easy for foreigners to use, especially if you cannot decipher Cyrillic.

Almost indistinguishable from buses (although much more environmentally friendly), trolleybuses are in operation throughout St. Petersburg.

Private minibuses running a fixed route, marshrutki are an essential aspect of St. Petersburg's transport system, and particularly useful for getting to the suburbs.

There is an abundance of taxis in the Northern Capital, especially along the major thoroughfares. You can flag a taxi, which is usually distinguished by a checkered bar on the rooftop, but you'll likely have to negotiate a fare. You can order a taxi cheaply (less than a $1) if you speak some Russian by phoning 089.

A new public transport initiative, these inexpensive water taxis now run on one route through the city. 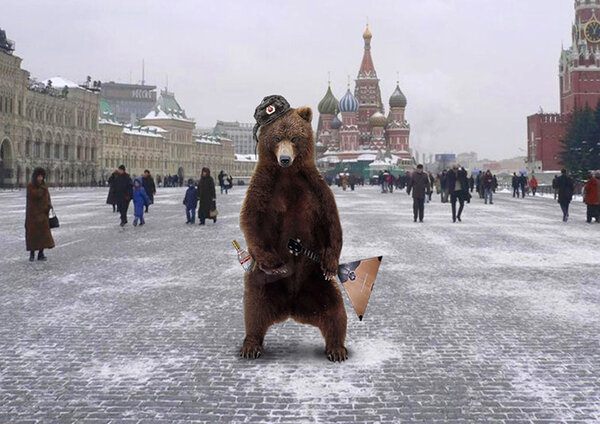 Until next time – До встречи (do VSTREchi)